As teachers of American literature and culture, we are well positioned to bring our academic training and insight to bear on the social justice concerns of our political moment, such as women’s rights, immigrants’ rights, environmental justice, and anti-racist activism. Yet we may not know the best ways to discuss these issues with students and may wonder if it is appropriate to do so in the context of the classroom. Headlines about the weaponizing of free speech and attacks on faculty academic freedom may inhibit us from raising these concerns in our classes or on our campuses, especially those of us who are graduate student, pre-tenure, or contingent instructors. Some faculty who embrace social justice commitments may have pedagogical reasons for not addressing political issues in the classroom, particularly if the issues are not related to course content or learning outcomes.

How can we deploy our knowledge and expertise in support of our social justice investments if traditional protests, petitions, and demonstrations do not appeal to us or are not suitable for our role on campus? The “teach-in” format of the 1960s is an overlooked activist option for teacher-scholars who want to awaken their students and campuses to the urgency of the political moment. Through structured, organized educational events on campus but outside the classroom, teach-ins are an effective strategy for American literature instructors to use when the need arises to facilitate informed dialogue around social justice issues.

What is a teach-in?

At traditional teach-ins, a series of scholars speak on their areas of expertise in relation to a specific political or social justice concern. The first “teach-ins” on college and university campuses were organized in response to the Vietnam War draft. Professors at the University of Michigan planned a teaching strike and an off-campus “teach-out” in the style of labor movement “walkouts.” Faced with threats of retaliation, the faculty members reconsidered. Rather than strike or walk out, the educators chose to “teach in,” or “occupy” (to use the 21st-century term) the campus with their academic knowledge and pedagogical expertise. Along with lectures and discussions related to the war draft, the teach-in also included debates, movies, and musical performances. Similar campus-wide teach-ins soon followed at institutions such as Columbia and Berkeley.

Later on, teach-ins were used by the “environmental, women’s, anti-Apartheid, and anti-nuclear movements, into the 1990s and 2000s [by] the Democracy Teach-Ins . . . and most recently [by] Occupy and Black Lives Matter.” A teach-in is an opportunity to promote dialogue about current political affairs outside the classroom and regular curriculum, but still within an academic setting. Teach-ins are an occasion for faculty to model civil discourse and to demonstrate the academic relevance of social justice concerns by connecting social justice issues to the content and methods of our discipline. Teach-ins are designed to be participatory, with discussion and questions from the audience. Although the earlier teach-ins of the 1960s were sometimes disruptive, teach-ins are part of the tradition of peaceful protest and activism.

Some teach-ins may have the overt political goal of “producing knowledge for use by participants as members of an organized, politicized campus community.” Others may simply aim to raise an issue. For example, a colleague who organized a teach-in in response to the 2003 Iraq War explains that faculty did not want students to “walk out of class” in protest, yet wanted to send the message that a declaration of war “was momentous and needed to be thought about and processed” as a campus community. Faculty from across campus provided historical, artistic, political, feminist, ethical, and military history lenses to deepen the campus’s thinking “about Iraq, about war, and about the implications of U.S. actions.” By considering the issue from so many perspectives, students were empowered to come to their conclusions.

“Day Without a Woman” teach-in 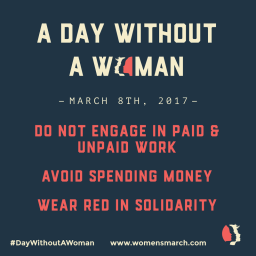 I helped organize a teach-in in conjunction with the “Day Without a Woman” strike sponsored by the Women’s March on March 8, 2017. Although many faculty at my institution were concerned about the matters related to the strike—women’s issues, labor issues, and anti-immigrant policies—we did not believe it would serve our students or the educational mission of our small, teaching-focused institution to “walk out” and not teach that day. Many of our students care deeply about social justice issues, but generally speaking, our student body is not “political.” Our students look to faculty for leadership on political activism, and we decided that a teach-in would provide a productive model of engaged citizenship and democracy in action.

We held our teach-in in the atrium of our library, a visible locale in the center of campus. Faculty from our Gender Studies program gave lectures on topics such as “Women, Science, and Feminism,” “Sojourner Truth: Abolitionist, Intersectional Feminist, Bad Ass,” and “The Value of Women’s Labor.” We also held a community reading and discussion of Margaret Atwood’s The Handmaid’s Tale. Our teach-in ended with a bilingual reading by two Mexican poets visiting campus that day, Marcia Trejo and Aurora Velasco.

To create a welcoming and fun setting for students and the entire campus, we provided catered refreshments and hot chocolate throughout the day. We publicized the teach-in to students, staff, and faculty over campus email listserves; we also posted flyers and announced it in our Gender Studies classes. Many students came to the teach-in on their own, and several faculty encouraged students and entire classes to attend the various lectures, readings, and discussions.

Once we had the idea, we were able to organize our “Day Without a Woman” teach-in in just a few days. My campus is small with few bureaucratic barriers, so we were able to find faculty speakers, schedule rooms, order food, and publicize the event on short notice. We had the support of key campus leaders who viewed the teach-in as a positive demonstration of civil discourse.

When I recently posted a query about teach-ins on Twitter, I discovered that instructors in the broader field of American cultural studies are embracing some creative and unexpected teach-in formats. Trish Kahle organizes socialist walking tours of her university’s campus that “re-narrate” the typical college admissions tour. Guy Emerson Mount has organized teach-in panels (rather than using the traditional lecture format) on his institution’s ties to slavery, a shooting by campus police, and hate speech on campus.

Rhonda Ragsdale, a history professor at Lone Star College, began tweeting about “social justice from a historian’s perspective” every Saturday morning under the hashtag “#SaturdaySchool.” She now has more than 8,500 followers and co-hosts Twitter teach-ins on issues as diverse as the present-day legacies of slavery to the importance of art. Online teach-ins and podcasts may be an option for those concerned about adversarial relationships between activists and academia or those who want to eschew their “universities’ ideological traps” and perpetuations of injustice.

Peter Sahlins at UC-Berkeley designed a semester-long teach-in on “The US Election of 2016 in Global Context.” Designed as a pass/fail course that met every Tuesday night in spring 2017, this teach-in featured faculty speakers from a variety of disciplines who discussed scholarly questions surrounding the unexpected victory of Donald J. Trump. Similarly, crowd-sourced syllabi organized around social justice and political issues such as #CharlestonSyllabus and #PostTrumpSyllabus have been designed and circulated in the activist and pedagogical spirit of the teach-in.

Considerations and recommendations for organizing a teach-in

Given the chaotic political news cycle, you may find that your campus needs to organize a teach-in on short notice. Consider the institutional structures and relationships that can aid you. For example, our Gender Studies program was able to provide the staff, resources, and budget for our teach-in. Individual faculty members’ rapport with campus staff made it possible for us to schedule rooms, publicize the event, and regroup when the inevitable planning complications occurred. However, if institutional logistics, bureaucracy, and politics make it difficult to move quickly and efficiently, perhaps the creative, alternative formats suggested above might be useful to you. At large institutions, organizing a teach-in for students and faculty in a single department or program, rather than an entire campus, may be more logistically feasible and effective.

Keep the education and empowerment of your students at the center of your teach-in. With students in mind, our “Day Without a Woman” teach-in was designed to be fun and interactive. My only regret was that we didn’t provide our students with opportunities for action. Voter registration or a letter writing event would have been action steps in-line with my institution’s mission of promoting engaged, democratic citizenship. There are some who argue that it is pedagogically irresponsible to bring matters of social justice to students’ attention without empowering them to do something. But other educators maintain that it is enough to raise the issue and let students come to their own conclusions and determine their own next steps.

Although the teach-in format is an alternative to more disruptive forms of campus activism and protest, it does not come without professional risk. Each instructor will need to identify and evaluate possible perils. Depending on your institutional context and your status within your institution or department, you may not feel professionally protected if you organize or participate in a teach-in. In such cases, those of us with tenure need to defend our colleagues’ academic freedom and promote free speech, the very pillar of our precious democratic institutions. We have a responsibility to wield our tenured status to amplify vulnerable voices and perspectives on our campuses and within the profession.

Teach-ins today can take many forms and are an established and pedagogically sound option for peaceful political resistance for teacher-scholars of American literature. For me, organizing a teach-in was a rewarding experience that aligned my personal values, professional ethics, and my social justice investments.

Share your ideas, thoughts, and experiences in the “comments” section. I would love to hear from you!

View all posts by rtanglen

One thought on “How to Organize a Teach-In”